What is P2P Network?

By: aniol.maeso
In: Internet, Servers
With: 0 Comments 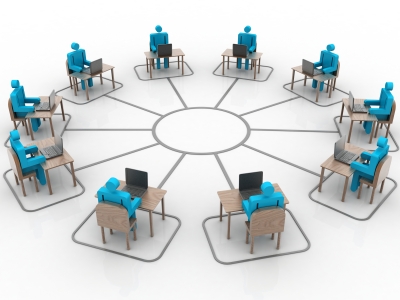 What is P2P Network?

A P2P network is the abbreviated form to say peer-to-peer network, these network is characterized by using a distributed architecture, that means that all the computers that are part of it and they share the workloads, so they became the nodes (“peers”) of the whole net. All the peers of the net are equal rated, so there is no central administration device, that means that they are clients and servers at the same time.

We say that a peer-to-peer network is created when two or more computers are connected with each other and share information without passing through a separate server computer.

The P2P network is mainly used for share and receive files from or to other computers simultaneously, so this is sometimes associated with software piracy and copyright violation.

But it can be used for other utilities like:

– Instant Messaging: The firs applications to communicate in internet were “gopher” and “IRC” but they hat a limited number of users. So the P2P technology make the number of users unlimited.

– Collaborative community: It permits the document sharing and collaboration, that is very important for the companies. (ex:Groove)

– IP Telephony: These permits the users to call anywhere in the world for free using the internet of our computers. (ex:Skype)

– High Performance computing: This is used in large companies to share resources like computation power, network bandwidth and disk space.

The P2P advantages weren’t discovered after 1990 that appear some applications using these network to share music and media like Napster, Gnutella and BitTorrent these applications change the way we consume media in that year and nowadays.

The use of this technology have its advantages and disadvantages, so let’s see some of them:

– They don’t need a dedicated server because all the nodes that compose it, are clients and servers at the same time.

– It takes less time to configure and implement.

– Every computer can be accessed anytime.

– The network security have to be applied to every computer separately.

– The backup have to be applied to every computer separately.

– There is no way to control the access of data.

– Users have to use separate passwords on each computer.

– Unsecure and unsigned codes may allow remote access to files on a victim’s computer or even compromise the entire network (virus).