History of the World Wide Web

By: sarah.kleinfeld
In: Global, Internet
With: 0 Comments

Everybody use it, everybody knows for what it’s good, but does anybody really know how the World Wide Web also known as WWW was created?  In this post I’ll try to explain you the history of this helpful medium so you can know a little bit more about it.

A lot of people often think wrong about WWW, most people confuses it with Internet and that’s wrong, Internet is older than WWW. Without the creation of WWW nowadays we wouldn’t have this useful tool to make our everyday life easier.

WWW was created in 1980 by Tim Berners, he was a physicist who worked at the European Organization for Nuclear Research (CERN) in Switzerland. This organization had the necessity to organize all the information and the investigations they were doing because all this work was divided in different computers. To organize all this information and to create an universal access for all who need it Tim create ENQUIRE, a very simple software which allows to edit files, organize them and to save them on a server.

He conceived his creation as a system of distributed information which allows to interconnect contents to get organized information to make it accesible and to share it. WWW had three fundamental bases who even nowadays are active: HTML (HyperText Markup Language),  HTTP (HyperText Transfer Protocol) and URL‘s (Uniform Resource Locator). The first sketch of this new system in 1989 was called mesh and at the beginning it doesn’t causes enthusiasm in the CERN.

One year later an engineer called Robert Cailliau checked the invention of Tim and with his team they develop with more detail the HTML, HTTP and URL‘s. So on 1991 Tim and Robert create the first browser and the first server, the httpd (HyperText Transfer Protocol daemon), the first server was a NeXT station. On this server they create a information page where you could find information about World Wide Web, HTML language and how to share content, this page was published on 6th August 1991. Since then WWW was expanding and in 1995 there were about 200 servers. 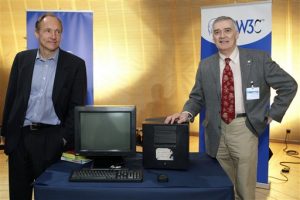 This creation opened a lot of new doors to get a lot of information, it transformed the knowledge into a universal thing which everyone can access. It also is a good way to travel virtually and to express what you think freely, it gaves you an opportunity to share your voice around the world. The arrival of WWW changed the world completely and it had a huge impact on the society.