By: annateixidor
In: Global, HTML
Tagged: history, HTML
With: 0 Comments 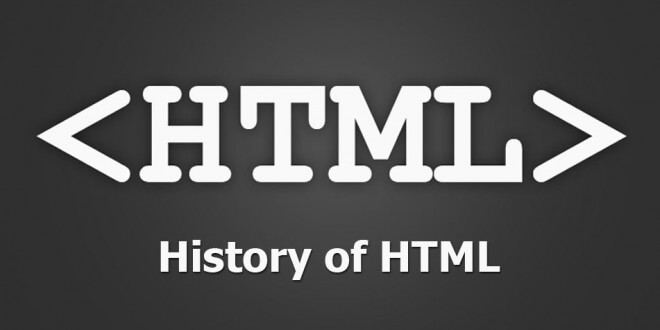 Before we get into the history of HTML, it’s important to note what HTML is.

What is html?
The HyperText Markup Language or HTML is the standard markup language for documents designed to be displayed in a web browser. It can be assisted by technologies such as Cascading Style Sheets (CSS) and scripting languages such as JavaScript.
And why hypertext? Because it is not just about a sequential text, but about all the possible links that we can integrate in it, from other designed pages to complex tables, videos or games, among others.

The origins of HTML

In the early 1990s, physicist Tim Berners Lee, a researcher at the European Organization for Nuclear Research (CERN), published an article titled “HTML Tags,” known as the origin of HTML.
This publication responded to the need to create a hypertext system that would allow CERN scientists and researchers to exchange information quickly and easily to reference.

Later, at the end of 1999, a new official specification was published: the HTML 4.01 version, and it was not until 2008 that we received a new version, the draft version of HTML 5 which is, in fact, the base of all current versions.

Since 2014, HTML 5 has been standard, and although new modifications and updates keep coming, the changes are minimal and easy to assimilate. For example, one of the latest recommendations is HTML 5.3, which came out in early 2021, but it was not a big change.

Who influences the history of HTML?

The British physicist Tim Berners Lee created the World Wide Web Consortium (W3C) in 1994, which is basically responsible for issuing standards and recommendations for the operation and growth of the web.

On the other hand, in 2004, the Web Hypertext Application Technology Working Group (WHATWG) was created.

Adding to this situation, the WHATWG also emerged as a response to a substantial lack of interest from W3C in continuing HTML updates.

Currently, HTML is linked to JavaScript and CSS3, in what the W3C has called the Open Web Platform, which allows these languages to be used in the development of multiplatform applications, that is, both on iOS or Windows and on Linux or Android.

As for the latest version of HTML, do not forget that it is HTML 5.3, which was released in the year 2021, but we will surely experience more and more updates over the years.

2022-05-23
Previous Post: What is HTTP and HTTPS?
Next Post: Differences between a Junior and a Senior Devoloper